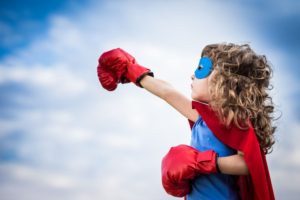 Glad to see you here today. Are you ready to take a leaping bound toward unleashing your writing superpowers? I sure hope so, because today you’re going to learn a routine called The Procrastination Punch-Down, and as you probably guessed, it’s serious business!

Procrastination is the bugaboo of many writers, even the greats – and keep in mind that even the greats are usually awful in first draft, with the exception of the few inspired lines we are all gifted by the Muse from time to time (follow the Way of the Writer long enough, and you’ll come to understand that most great writing happens after the first draft). In fact, one’s ability to overcome procrastination is considered by many to be a key to discerning who will succeed as a writer, and who will remain a dreamer of writing.

We don’t just dive into the Punch-down, we warm up first. How do you do that? You ask yourself a question: Why do I procrastinate?

Many answers may pop into your mind, things like “I’m waiting for inspiration(that darned Muse! Where is she?),”” or “I’m waiting to have the perfect chunk of time.” It may be that you write better on stormy days (did you know a startling number of writers find themselves more inspired to write in inclement weather?), or when the house is clean (or empty). Maybe you just need to “feel it.”

Well guess what, sweetums? You only think that’s why you procrastinate. Oh sure, I know it looks like that from where you stand, but the truth is far, far more frightening! Hang onto your seat, this is going to throw you for a loop, my friend.

The excuses you give, c’mon, you know deep down that they’re not true, you sense it in your center, even as you speak the words, but you can’t really explain it beyond that – and it isn’t your fault. See, what’s happened here is that you’ve fallen prey to the Procrastination Goblin! He is a hungry little monster, just aching to feed off your fear, self-doubt, and

He’s full of tricks, too, that goblin! He compels you to think of all the things you ‘should’ be doing other than your creativity, while also triggering your fear, self-doubt, and perfectionism.

Yes, I said perfectionism there, too. Does that sound like one thing that isn’t like the others?

Many think perfectionism is a good thing, but far, far too often, it can lead to someone freezing in their steps, waiting for the right moment and circumstance – something that may well never come. And that Procrastination Goblin? He loves perfectionism, because he knows it will deadlock you for long periods of time, so he can feed to his heart’s content.

Now that you know procrastination isn’t about you, but the result of an evil Procrastination Goblin whose compelled you to put off until some ephemeral later what you know in your heart you are called to do today, solely so he can feed off of your unspent creative energy, it’s time to take him down.

Time For the Punch-Down

STEP ONE: Keep your ears open for the words on your lips (or inside your head) that involve putting your art off until later.  Unless there’s a reason involving mortal danger, natural or human-made disaster, or utter and total chaos and destruction, anything that derails you from doing your art now, should be considered highly suspect – for you are a creator, creating is what you do. You are not a “waiting until-er”,- but a creator. Waiters wait, creators create. When you forget you’re a creator, and turn into a waiter, the Procrastination Goblin is almost definitively in play!

STEP TWO: Look in the mirror, really meet your eyes – you need to see the you beyond the film of the Procrastination Goblin’s spell. Hold eye-contact with your mirror self, and say aloud three times, “Waiters wait, creators create – I’m a creator!” Make sure to say it louder each time – and really feel it, down in your bones. If you now feel moved to action, skip to step four.

STEP THREE: Once you’ve had some results giving the Procrastination Goblin the boot, you probably won’t need to go beyond Step Two, however, when you’re first starting out, even though Step Two may leave you fired up, self-doubt may still linger – this is the thicker, foundational level of the Procrastination Goblin’s spell, his insurance, if you will, that even if you overcome the more superficial excuses related to things such as limited time, feeling uninspired, and chores that need doing, your doubt as to the value of time spent in creating will win the day (for him!).  AND – the value of his efforts are doubled-down, if you have bought into the lie of perfectionism.

SO – now you need to bring out the weapon of Goblin Destruction: It’s time to shout (or write – with feeling!), “First drafts are NEVER perfect, it’s all about progress, not perfection – and I won’t let you stop my progress! Goblin, be gone!” It’s perfectly acceptable to punch your fist in the air at this point (make sure no one – and no thing – is standing within reach!).

STEP FOUR: Congratulations, you’ve punched down the Procrastination Goblin – time to sit down and write, to make your art! (NOTE: If you feel called to celebrate, rather than work, you may need to go back and repeat steps two and three, as it sounds like the Procrastination Goblin still has you under his spell, as were he truly gone, you’d be ready to dive into creation).

Never forget, while you may have beaten down the Procrastination Goblin today, he will be back to try again another day – stay alert! Every time he shows up, punch him down as soon as you’re aware of his presence, you cannot allow him to dig in and take root, he’ll be all the more difficult to root out. You’ve got this, Creator! Remember, you’re more powerful than some Goblin who needs to feed off your creative juices – were that not so, he wouldn’t come after you in the first place. You are in control, you just need to remember that, and show the Procrastination Goblin – and yourself – whose boss.

For today: Do the Workout, Superhero! And do it daily, until you’ve given the Procrastination Goblin the boot – and any time he dares to rear his head again? Punch-down time again!

Thank you for this bit of your time and mind-space.

Create an amazing day for yourself!

Success! Now check your email to confirm your subscription.